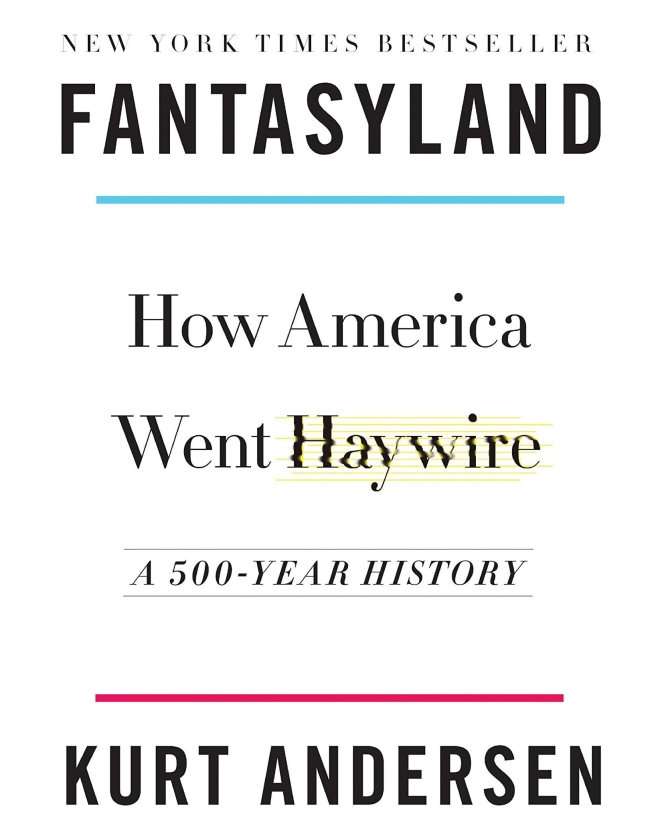 Recommendation: Yes, but don’t take my word for it – there is an extract here on The Atlantic

Where to read: Socially distanced and in a mask folks

Read with: An acid trip…or just a nice calming glass of merlot

In brief: More current every second that passes, Fantasyland is slightly too enchanted by it’s own cleverness but it is an enjoyable read. It also gave voice to a sense that I got while I was studying over there.

The term ‘military-industrial complex’ should be familiar to you, but Andersen is positing the concept of the ‘fantasy-industrial complex’. It is a not unconvincing theory, frankly, and one that fits in with a prominent school of cultural commentary in the United States – think The Sky is Falling or The Atlantic’s excellent “Shadowland” series. It’s also linked to another interpretation of American dysfunction, which looks at the spread of hyper-individualism. After all, is there any better expression of the privileging of the individual over the community than the idea of each individual inhabiting their own reality.

It is worth reading the book in full, but allow me to present a brief and incomplete highlight reel of American fantastical thinking:

The two major inflection points Andersen identifies, however, are the 1960s, or what he only somewhat jokingly refers to as “America’s national breakdown”, and the internet age, which (hopefully but almost certainly not) reached its apotheosis in Trump’s election.

The former is of particular importance in Andersen’s telling. In his view, it was the point where multiple social and cultural groups, all in passionate disagreement, became untethered from reality at around the same time. Allies in their collective disregard for fact-based reality, university counterculture, postmodernism and relativism in academia, the psychotropic school of psychology, the increasing rejection of government authority during Vietnam and a sort of anything goes mysticism on the left met a resurgent brand of crack-pot, eschatological, literalist charismatic evangelical Christianity on the right. There were even places where all those tendencies met and combined in all kinds of fucked up ways (cf. Jonestown and a lot of the cults that have subsequently emerged).

The country then lurches on in a collective state of borderline insanity and mysticism, believing in angels, buying Oprah’s bullshit and The Secret and the prosperity gospel, getting caught up in celebrity obsession and reality TV and generally spinning further and further away from a reality based centre. Fox News gets a mention there, as does the huge popularity of conspiracy theories. Then, of course, the internet comes along and everything goes to absolute shit.

And now we find ourselves here:

There are definitely places where he gets a bit carried away, and if we’re being honest with ourselves, the longform Atlantic article does capture the point sufficiently, but it is an alarming and enjoyable read none the less.