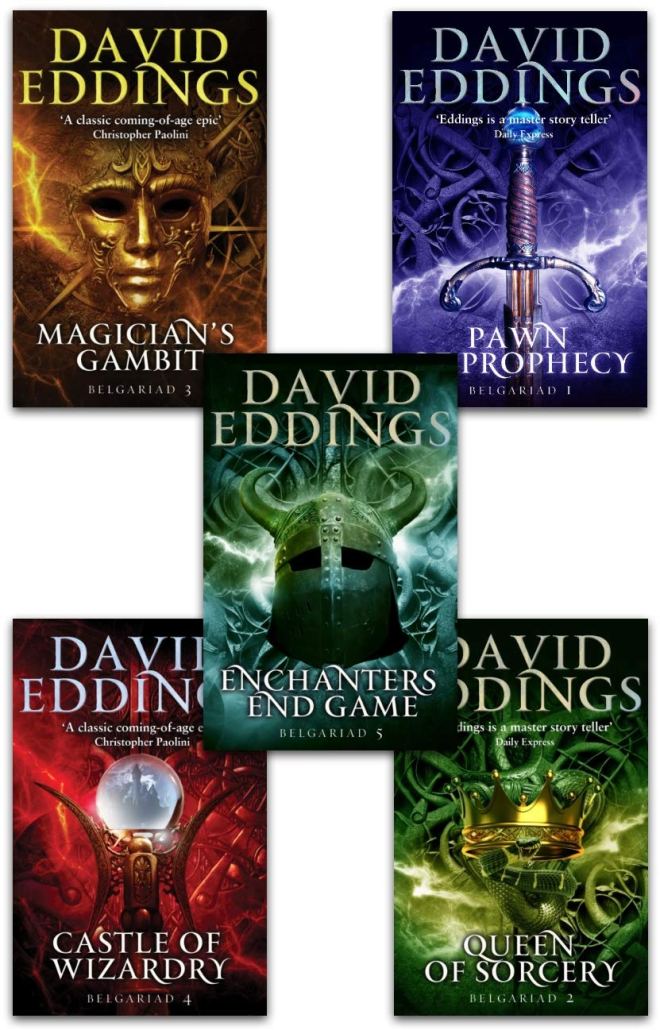 Fantasy, Fiction by Bookshelves and BourbonJuly 24, 2020

Recommendation: Go for The Elenium and work backwards if you must, but I wouldn’t necessarily recommend picking it up as an adult

Where to read: As above, in bed twenty years ago

Read with: A glass of Memory Lane Sav Blanc

In brief: This was a solid nostalgia read and I did rather enjoy it, I will admit. The joy here is the characters, who are wonderful, but you should be aware that the gender and race dynamics could be generously characterised as retrograde (and less generously described as appalling).

I was introduced to Eddings through a different series, The Elenium, I started reading in a nursing home in Bombala and adored. The Belgariad is OG Eddings – slightly cruder, slightly more conventional and far closer to outright parody than his later works. Eddings was a high school English teacher writing contemporary fiction before he decided that high fantasy was where the money was so the series is, in many respects, both masterclass and piss-take of the hero’s journey and high fantasy genre conventions.

In terms of pros, the repartee and relationships between the characters built through the series are glorious. Eddings was and probably still is my benchmark when it comes to writing banterous dialogue and he sets the bar high (funnily enough, I’ve also been re-watching The West Wing and it is quite a similar style). The vocabulary is also quite sophisticated – I genuinely attribute most of my verbal precociousness in school to reading Eddings. It is also, and this way be a strange thing to note, one of the few fantasy series which shows any appreciation at all of the concept of economics (it’s rubbish, but still). There are very few things that get on my nerves quite as much as “medieval” fantasy worlds with nobles and peasants but no merchant class or trades people.

In terms of negatives, the aforementioned economic system is based on deeply questionable ideas about national characteristics and racial characteristics. Eddings mercifully moved away from this tendency in his later works (ish) but The Belgariad demonstrates some profoundly questionable ideas about nations as homogeneous racial and religious entities. For example, the Drasnians are merchants and spies, the Chereks are all berserkers, the Thuls are stupid serfs etc. It breaks down in some cases (it is all much more sensible where he has a historical precedent to work from) but the national/religious/racial determinism is pretty obnoxious. The most charitable interpretation I can possibly put on it is that it does accurately reflect a certain understanding of how national history is told in order to foster national identity, except taken literally, The least charitable, and more accurate, interpretation is that the whole thing is just racist as fuuccckkkk….

All in all, it’s an isolation appropriate exercise in nostalgia, but not necessarily a comfortable one.