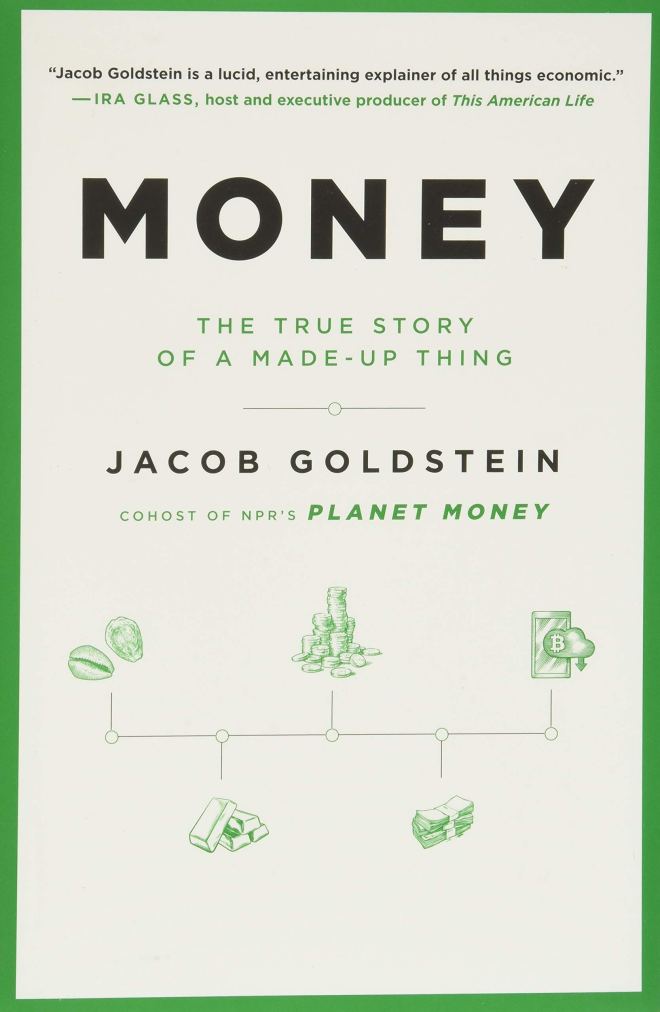 Money: The True Story of a Made Up Thing

Recommendation: A riveting account of a usually dry topic.

Where to read: Bite sized chapters —great for the commute

Read with: As John Maynard Keynes mused on his deathbed, “my only regret in life is that I didn’t drink enough champagne.”

In Brief: Books on the social history of everyday items often feel like they’d have been better as a New Yorker essay but this keeps your attention all the way through.

Jacob Goldstein has spent over a decade producing the NPR podcast Planet Money and it shows in his writing. The ethos of the podcast is to make often complex or seemingly dull topics in the field of economics worth listening to for 20 minutes. This book is a natural outgrowth of that work. This book feels like a Contiki tour of the history of money (minus the hangovers and bus travel).

Goldstein’s skill is on display in the book’s structure – tracing the concept of money through history is difficult, as it has been invented by different cultures over time to serve different purposes. Each of the book’s five parts covers a different era in how people have used money. Much like a podcast, the chapters within each part seem timed to ideally suit the commuter. The book presents a vignettes including Chinese traders inventing money almost by accident, a Scottish man on the run from murder charges revolutionising France’s 18th century economy, and Angela Merkel bailing out Greece. Nonetheless, Goldstein ably shepherds these disparate anecdotes into a compelling narrative.

The real limit to the book, ironically for the popular social history genre, is that is perhaps too accessible. Parts of the book that cover well-trodden tales such as the Bretton Woods Conference to establish the new economic order after World War II may feel too surface level for those already familiar with the topic. The casual nature of the writing style also means that at times those keen to learn more may be left wanting.

Despite these concerns, Money is an easy recommendation. More people should be able to understand the economic system that governs their daily lives and this is among the best books able to both educate and entertain on this topic.