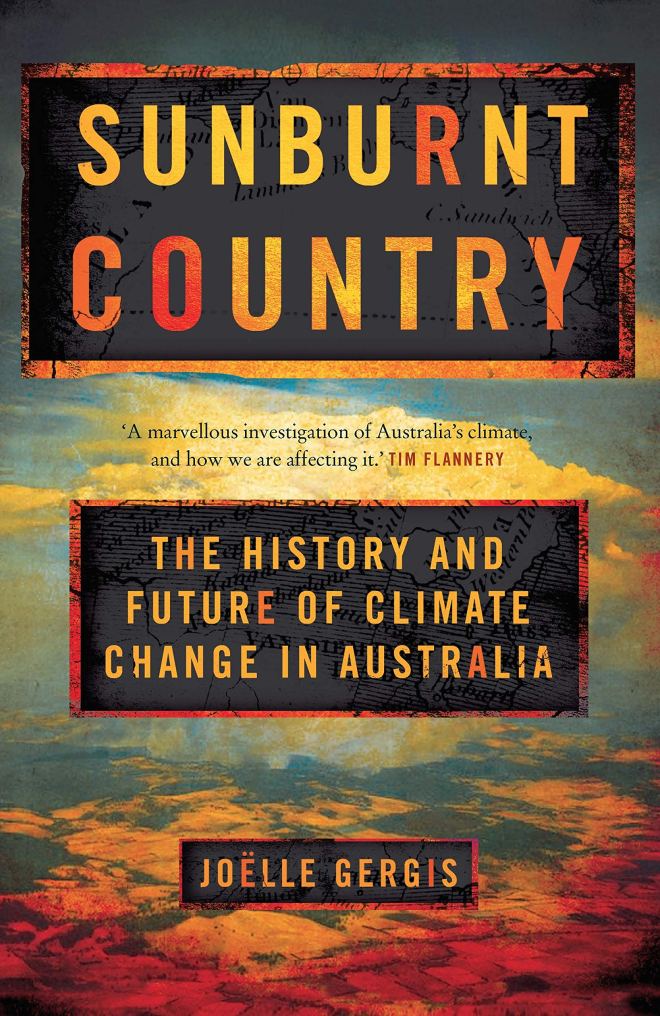 Recommendation: It’s pretty Australian-specific but if that’s you, it’s a valuable read

Where to read: I’m really sticking with my bunker suggestion. Also I’m building it in New Zealand

Read with: At this point, drink the pain away – any of Jura Superstition, Smokehead, Dead Mans Fingers spiced rum or Knob Creek Kentucky bourbon seem appropriate

In brief: Yeah, we’re still fucked, but at least you’ll be educated about it

If you are friends with loopy relatives on Facebook, you will no doubt have seen assorted refutations of climate science centred on the words of Dorothea Mackellar’s ‘My Country‘. The “argument” inevitably put forward goes something like this: ‘Mackellar wrote about “droughts and flooding rains” in 1913 so Australia has always been that way and so it’s not climate change causing the [flooding/bush fires/droughts/45°C heatwaves]”.

This position is, of course, absurd on its face and becomes more so if you think about it for more than three seconds. The point Gergis is making here is that the climate of Australia has always been unstable and extreme and that climate change will exacerbate that pre-existing trend. The climate change argument is not that we’ve gone from a balmy Mediterranean climate to chaos, it’s that we were already extremely vulnerable to climate variability and don’t have a lot of room to move. And a little reminder, we are the most vulnerable developed nation to the effects of climate change.

It’s also an explanation of some really cool archival work and some really, really cool science. The climate modelling they did, and the historical data they looked at to do it, is fascinating to read about. Gergis also gives an account of the fallout from the discovery of a minor error in the methodology which, while not changing the conclusions, was used to undermine the validity not only of the study but also the entire field of climate science. Of course, because conspiracy-nuts, right-wing extremists and internet edgelords got involved, it also became extremely personal (and personally dangerous) for all those involved. This is, unfortunately, not surprising but I was left wondering if there was a role for pro bono lawyers in advising and defending scientists who become the subject of these kinds of appalling campaigns of harassment (defo proceedings, assistance with AVOs, assistance dealing with death threats etc).

This is the kind of book you want to throw at the heads of reality deniers (except that it wouldn’t work). I don’t really have any suggestions about what do with that, other than possibly pointing out that relying on a sentimental poem written by a teenager living in England is possibly not the best source. I don’t regularly revisit the “poetry” I wrote at nineteen but I suspect it wouldn’t be a particularly reliable reflection of anything useful. And using the word “why” frequently in conversation, both because it’s one of the fastest ways to make someone look and feel stupid and because it’s really not on you to explain why you “believe” in climate change.

Speaking of, the use of the word “believe” in the context of climate change pisses me the fuck off. “Belief” is an acceptance that something exists or is true, especially one without proof. The use of the word “believe” in this context, as in “debates” about evolution or the shape of the fucking earth, implicitly undermines rational, reality-based knowledge claims by placing them on the same level as, and ascribing the same credibility to, religious belief in creationism or intelligent design or the “belief” that the world is flat. The acceptance that climate change is and will affect the planet is not a matter of “belief” – it is a rational conclusion supported by evidence and the considered views of the vast majority of scientists. So I don’t “believe” in climate change, I “think” that climate change is happening.