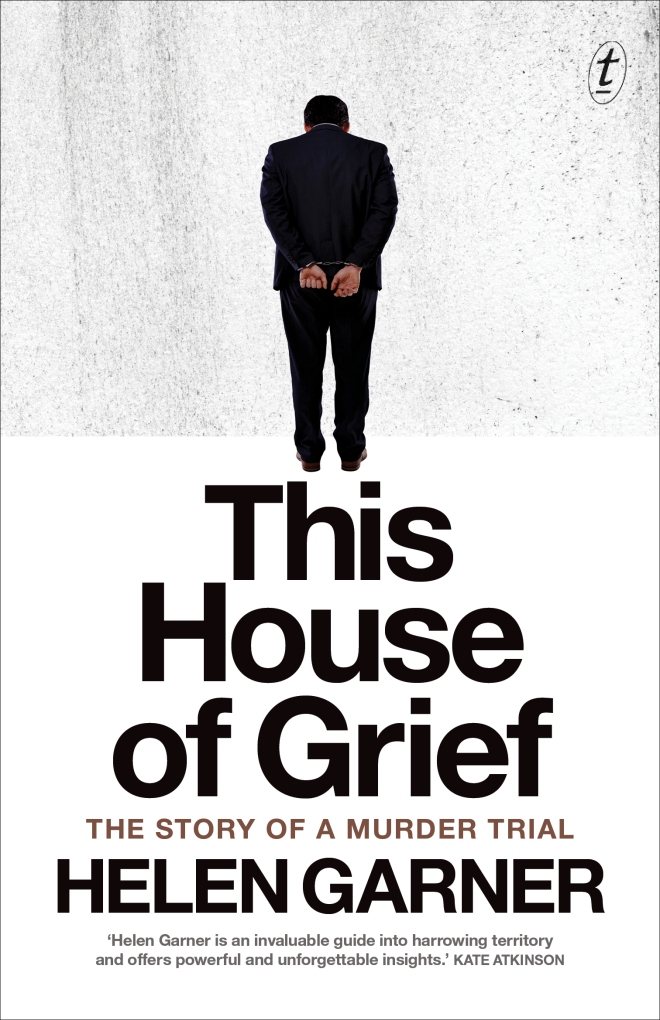 This House of Grief

Recommendation: I finished it only for the sole purpose of writing this. Please go read this instead

Read with: Drown your sorrows, but in a “self-indulgent journalist” kind of way

Where to read: With this open beside you and in the front of your mind

In brief: If this was a novel I would probably have enjoyed it and I’m sure many readers would have found it extremely compelling. It’s wonderfully written but the self-absorption (or introspection, depending on your position and how charitable you’re feeling) is hard to cope with here. My main takeaway was an extended meditation about the ethics of true crime reporting.

This House of Grief is a book about a woman watching the trial of a man who murdered his three children.

It is a good novel – the supporting characters are beautifully sketched, the prose richly detailed and littered with telling details and revealing vignettes, and the main character, an unreliable first-person narrator, reflects the readers’ bafflement and confusion as the story unfolds. The courtroom scenes are wonderfully theatrical, with the cut and thrust of cross-examination and the presentation of evidence compellingly portrayed.

But it’s not a novel. Robert Farquharson really did murder his sons and really did go on trial for it, twice. And instead of being swept up in this story and the beauty of the writing and the drama of the courtroom, I found myself bridling at the whole premise. This House of Grief is far more complex than your average tabloid reporting, but “if it bleeds, it leads” is no less distasteful in a different format.

At the heart of my discomfort is the central premise of the book – “Garner-as-narrator” hears about the incident, feels a “pull” to the story and then writes about the case from the position of someone emotionally and practically involved in it. At one point, she frames herself as another juror, except that she is allowed to hear evidence the jury is excluded from (most importantly the suggestion that the murder may also have been an attempt at suicide). “Garner-as-narrator” is present in every line, throwing out rhetorical questions and observations and chewing over her emotional reactions to everything. Ostentatious “self”-examination is Garner’s oeuvre, and I have no doubt it could be devastatingly effective in the right context but it grates here.

Speaking in 2002 about her use of self-critique as a literary device, Garner wrote:

The deal is this: if I’m rough on myself, it frees me to be rough on others as well. I stress the unappealing, mean, aggressive, unglamorous aspects of myself as a way of lessening my anxiety about portraying other people as they strike me.

There’s an echo of this in This House of Grief but the deal, questionably ethical as it is, seems to have expanded. The argument implicit throughout the book is that, by choosing to involve herself in this story, Garner has acquired an authority to foreground herself and her reaction to the trial. There is an underlying insinuation that we as readers should give credence to her professions of grief and confusion because she has become invested in a way that others have not. This is not, I should acknowledge, a new critique of her work:

When The Spare Room came out, a stranger accused Garner of always pushing herself into the centre of other people’s trauma. Taken aback then, she says now, ‘‘What I’d like to think I do is to take their trauma into the middle of me and contemplate it and brood over it in some useful way that’s not just a lot of screaming and shouting about evil.’’

There’s no equivalence between this and the style of something like Today, Tonight but it still strikes me as uncomfortably ghoulish and not a little masochistic. I suspect that a less-gifted author haunting courtrooms, raking over the coals of brutal evidence, and asking for meetings with family members, only to produce a book which is fundamentally about their own experience, would receive shorter shrift – the accusations of voyeurism would be flying thick and fast. Faux-unfiltered, self-indulgent introspection has its place (Garner’s influence is clear in Eggshell Skull, for instance) but it is deeply uncomfortable when based in the incomprehensible pain of others. Right at the end, she writes:

I imagine the possessive rage of their families: ‘You never knew them… How dare you talk about your “grief”?’

But no other word will do. Every stranger grieves for them. Every stranger’s heart is broken. The children’s fate is our legitimate concern. They are ours to mourn. They belong to all of us now.

That might be true, but “every stranger” didn’t write a book about her experience of their loss.

I might be more inclined to put up with the self-obsessiveness if I thought that the product of all of this was in fact useful, some insightful commentary about grief or the justice system or family violence, for instance. But there isn’t.

The lack of the latter is particularly galling – Garner spends pages and pages empathising, sympathising with Farquharson, wanting to believe in his innocence because the possibility that a father could kill his three children is too horrible to countenance, without once pivoting to the context in which that murder took place. According to a recent report by the Australian Institute of Criminology, around 10% of homicide victims in Australia are children and most of them are killed by their parents or guardians. At the end of This House of Grief, you’d be no wiser about how or why that might be the case, or even that it is.

Nor is Garner another Arendt describing “the banality of evil”. I was about 25 pages in and ready to throw it out the window of a moving bus; spare me the coy references to Cindy Gambino’s decision to divorce Farquharson and enter a relationship with another man, the agony and humiliation of divorce, the persistent and utterly ineffectual attempts to “understand” how he could have done what he did. It’s not quite “[insert murderer’s name here] was a ‘good bloke’” but it’s not far off. The attempt to empathise sets up a tension Garner never really works through – I kept waiting for the moment of catharsis or resolution, for one of the endless rhetorical questions to be answered, but it ends fundamentally where it begins. With no access to the family or real insight into the story other than that gained through courtroom observations, Farquharson remains an enigma, albeit an infantilised one.

In short, This House of Grief is an appallingly tragic story recounted in beautiful prose in a book about someone else that I cannot in good conscience suggest you buy.

For more and better discussion about the book and Garner’s work more generally, see: